No, this isn’t a post about child employment. It’s a post about using children as props. Wait that doesn’t sound right either. You know what let’s just look at an example.

We have a badge component:

You might see these sprinkled in different applications next to a label to show how many items are there inside - a number.

In cosmos, the Badge comes in multiple colors each for a specific context (information, danger, etc.)

There’s another similar component in the above UI, the Label component

This too comes in multiple colors for each context:

Aim for consistent props across components

The way they take their value is different. Both of them have their own way.

While count makes sense for the Badge component on it’s own, put together with all your other components, it’s a custom API that your teammates/users have to learn.

To make them consitent, I’m going to name the prop: content, it’s the most generic name I could think of - more than label, text, value.

We lost some visible detail but gained some consistency. We can still enforce the type of the value with prop-types, so I think that’s an okay trade-off.

If you’ve defined props that take arbitrary input that aren’t based on a data structure, it’s probably better to use composition – Brent Jackson

Thats tip from this post - Prefer composition over props.

Let’s refactor that API with children:

Check it out, that looks great. 👌

Bonus: When you choose children instead of a text prop, the user of this component gets more flexibility without the need to modify the component.

Take this alert for example, I want to add an icon before the text.

With children, I can add an Icon in this alert without going back and changing the component.

Hey React friends, I could use some help. I keep running into this pattern where certain components (esp. lists) could be chunked out into smaller components, or managed by passing in an object. Is one way more standard or better? 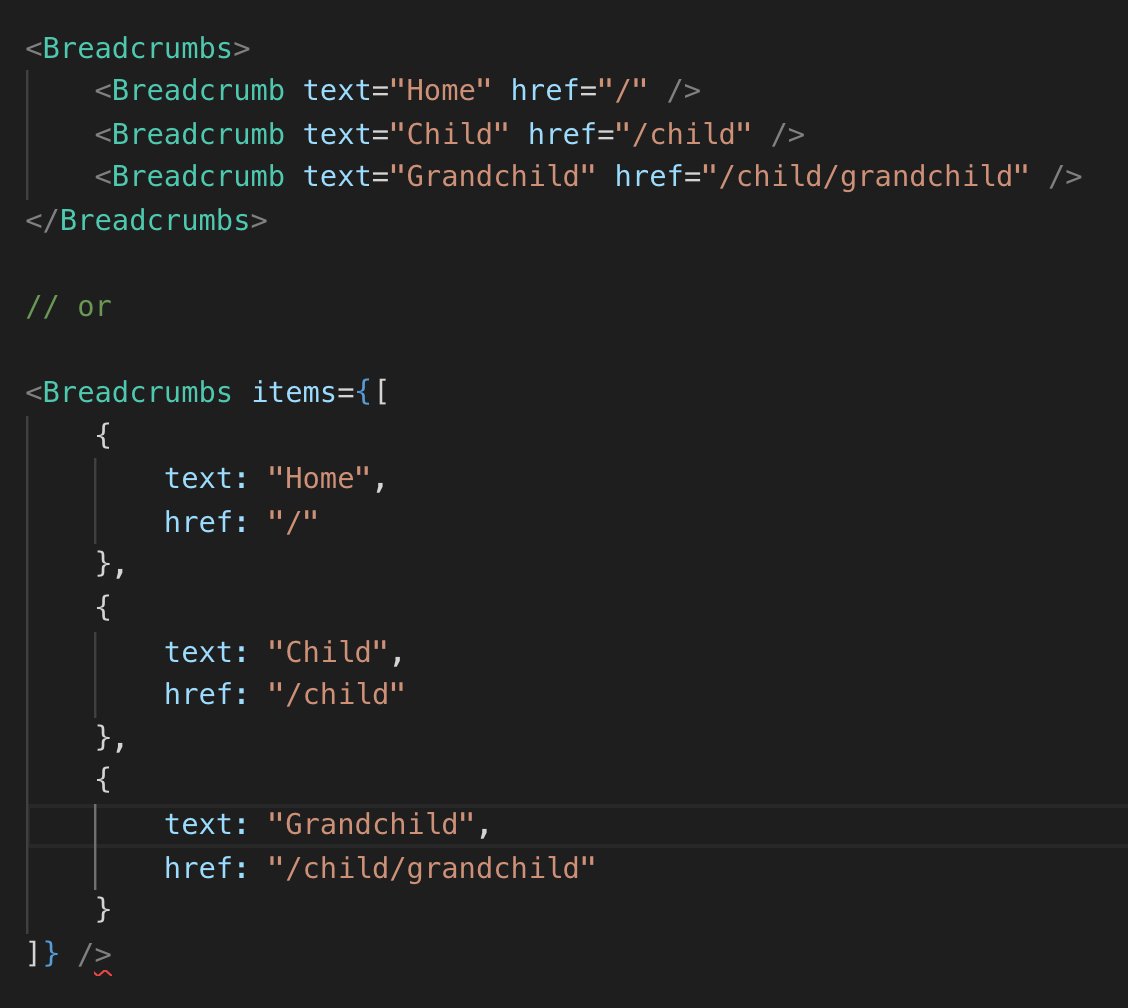 First of all, let’s not use a text prop and use children instead.

Now that we’ve taken care of that, let’s talk about those two API options.

As you can guess, I like the first one.

Exception to the rule:

What if Brad actually wants to restrict the developer from doing any of the customisations I mentioned above? The flexibility isn’t a feature for him, it’s a bug!

In that case, the second option is better because it locks down the features.

Here’s my reply to Brad.

Here are some more examples of how this tip can improve your code, the last one is my favorite.

Forms are a great use case, we want to control the layout of the form, how errors are shown, etc. But, at the same time, we don’t want to make it impossible to extend.

The last example is really interesting.

Sometimes you need a component to work in way too many situations. Trying to create a component that is very flexible but still has a simple API is hard!

This is where inversion of control comes in - Let the user of the component decide what to render. In React land, this pattern is called the render prop pattern.

A component with a render prop takes a function that returns a React element and calls it instead of implementing its own render logic.

from the React docs on render props

One of the most popular example of render props is the official Context API.

In the following example, the App component controls the data but doesn’t control how it is rendered, it passes this control to the Counter.

Notice anything interesting about that Consumer API?

Instead of creating a new API in the library, it’s using children to accept the function that will tell it how to render!

How cool is that!

Here’s a call to action for you - Go back to your codebase and find that component that accepts a custom prop when it can easily just use children.

Hope that was helpful on your journey

Want articles like this in your inbox?
React, design systems and side projects. No spam, I promise!
read past issues